As we all know, the horrors of lynching have emerged since last three years. The common pattern is that those suspected to carrying or storing beef are lynched mercilessly by the Right Wing Gaurakshaks, the so-called protectors of cows.

In 2015, when it all began, prominent people from the ruling Bharatiya Janta Party (BJP) played it down and even went onto justify the horrific incidents. There was, obviously, a huge outrage in the country.

The incidents have started happening more regularly since recent times. And, as expected, members of the BJP and RSS, their affiliate, have justified it.

Here are some reactions to the latest lynching and mob killing incidents:

Comment: “If humanity gets rid of this sin (eating beef), the society will get rid of this problem (lynching).” – Indresh Kumar, RSS (Rashtriya Swayamsevak Sangh) leader
Meaning: If you don’t stop eating beef, you will be killed.

Comment: “It’s (lynching) not the reality of Rajasthan. It’s the reality of the world.” – Vasundhara Raje, Chief Minister of Rajasthan
Meaning: It’s happening everywhere in the world (which is a lie). In other words, bade bade deshon mein aisi chhoti chhoti baatein hoti rehti hain. 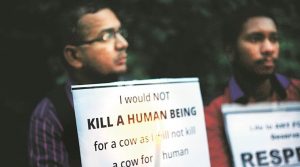 Comment: “I would have got the intellectuals shot if I was the Home Minister. Our country faces grave danger from intellectuals and seculars than anyone else.” – Basanagouda Patil, BJP MLA from Karnataka.
Meaning: This one actually makes you speechless. It’s self-explanatory actually. It’s like a dangerous goon openly threatening to kill anyone who asks questions or criticizes the government. The second statement compares intellectuals and seculars, which are praiseworthy qualities, with someone as dangerous as a terrorist.

However, there is no hue and cry this time. One can understand the silence of the unofficially government owned loud-mouth pseudo ‘news’ anchors who are otherwise ready to tear into someone from opposition even for hugging someone. But what happened to the genuine social media users?

If those ruling this country openly threatening to kill anyone who believe in secularism isn’t outrageous enough, what is? This raises a disturbing question as to whether we have normalized such Talibanistic behavious, statements and attitude.