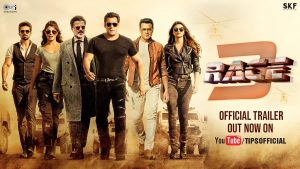 In India, it is believed that films for youngsters should have young actors playing modern characters along with other ingredients like romance and songs and dance. Without these elements, a film doesn’t get acceptance from the youth.

But rarely we see a film like Umesh Shukla’s 102 Not Out, which transcends age groups. The fun element and the emotional message ensure that it’s worth watching more than once.

102 Not Out is about Dattatrey Wakharia (Amitabh Bachchan) who is 102 years old man staying in Mumbai. He is energetic and full of life despite his age. But his 75-year-old son Babulal (Rishi Kapoor) is his complete opposite. He is tired of life and has ‘accepted’ his old age.

Dattatrey tries a trick to ensure his son starts living life in a jovial way. He gets the timely help from Dhiru (Jimit Trivedi), a guy working in a neighbourhood shop. Will they succeed in changing Babulal’s perception towards life?

Rajkumar Hirani had once said that he follows a theory that a scene should either make the audience laugh or move them emotionally and this is how he structures his entire film. This is seen in 102 Not Out as well. A large majority of the film is filled with moments that get you in splits regularly. 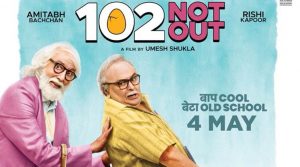 At the same time, it keeps providing emotional doses. Mind you, this is not an tear-jerker in any way. There is a sequence pre-interval where a character goes down memory lane and enjoys the simple joys of life that he used to cherish at one point. This is one of the most delightful moments you would see in a long time. In fact, this part can even be seen separately as a short film.

More importantly, the person going through it might be aged. But it is appealing for anyone having a heart, irrespective of his or her age.

The story of Shukla’s much appreciated OMG! Oh My God (2012) changed track in the second half. The narrative does the same in 102 Not Out as well. But like the previous film, it doesn’t turn out to be a problem due to the message and the brilliant climax.

There is not much scope for music. But ‘Bachche Ki Jaan Lega Kya’ turns out to be impressive. The production designer deserves accolades.

102 Not Out has only three main characters and they all rise up to the task. Amitabh Bachchan effortlessly switches between humour and seriousness while showcasing his immense acting prowess. On few occasions though, it seems he tries hard to bring out the specific tone needed for his character.

Rishi Kapoor doesn’t get overshadowed by him in any way because of the depth of his character and, of course, his excellent performance. This one has to be one of his best acts. Amidst such powerful performers, Jimit Trivedi leaves behind a terrific impact despite being a debutant. He succeeds in building a rapport with both characters.

Overall: 102 Not Out is a delightfully moving saga that is worth experiencing for people of all ages.