The state election results in Rajasthan, Madhya Pradesh, Telangana and Chattisgarh have come as a blow to the BJP (Bharatiya Janata Party). The party has suffered heavy defeat in the three states much against its run of play with the results in MP too not being in their favour. This has ensured that jokes and memes about the EVMs are being shared online.

The rivals of the BJP, especially the Congress party, has been vocal a number of times about their doubts in the EVM (Electronic Voting Machines) used in India’s elections whenever they have lost to the BJP in last few years. But all their doubts about the ‘dangers’ of EVMs have evaporated after they have won handsomely today in the three of the four states. Not a word against the EVMs now.

While it is hypocritical to change stand on the issue once you win the election, it would be wrong to assume that only BJP’s rivals have been crying the EVM song after defeats in elections. Not many would know that BJP itself was highly against the use of EVMs when they lost the Lok Sabha Elections in 2009.

In fact, two of its leaders also went about writing books harping the ‘dangers’ of EVMs.

BJP’s spokesperson G V L Narsimha Rao came up with a book against the EVM titled ‘Democracy At Risk! Can We Trust Our Electronic Voting Machines?’ in 2010. In the book he has gone onto explain how one shouldn’t trust the EVMs.

Here are the contents of the book: 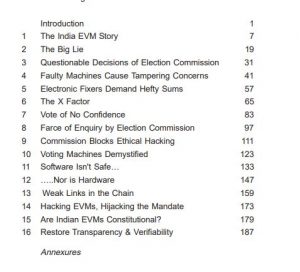 An excerpt from the book read, “Holland and Ireland too have abandoned EVMs and have gone back to paper ballots. And developed and technologically advanced countries in our region like Japan and Singapore have so far stuck to paper ballot voting, owing to their simplicity, verifiability and voter confidence in the system. Today, reliability of Electronic Voting Machines and the integrity of electoral verdicts is a subject of intense political debate and media scrutiny across the world.”

Another significant excerpt read, “In our system of representative democracy, elections provide the only occasion when the people directly exercise their sovereign power. Immediately thereafter this power is ceded to the elected representatives. If this sacred power is vitiated by a voting system of dubious integrity open to insidious fraud, it is evident that our democracy is seriously endangered.”

In chapter four, Rao has explained how on numerous occasions the EVMs have malfunctioned and misbehaved. During the launch of the book, Rao gave a statement as strong as, “It is a blatant lie that EVMs are tamper-proof. I think the use of EVMs on a national scale is illegal.”

Veteran BJP leader Lal Krishna Advani aka L K Advani had not only launched the book but also wrote a foreword to it.

The PDF copy of the whole book can be found HERE.

In the same year, another senior BJP leader Subramanian Swamy (who was then the chief of Janata Party), along with author S Kalyanaraman, also came out with another book against the EVMs with a strong title ‘Electronic Voting Machines: Unconstitutional And Tamperable.’ The title gives a clear idea of the contents of the book.

While any online or PDF copy of the book is not available, its description on Amazon reads, “EVMs have already been banned in many countries, including Germany, the Netherlands, Ireland and Italy, and the list is getting longer. Thus, there is a growing lack of confidence in EVMs the world over. Why should India persist with a failed system that has been abandoned worldwide? The risk of wholesale rigging inherent in EVMs, howsoever small, cannot be accepted in a democracy where the stakes in winning elections are so high.”

Both books are still available for buying HERE and HERE.

Surprisingly, the two books and BJPs strong stand against EVMs isn’t known much. It can be attributed to weak public memory or the lesser reach of the social media back then or both.