The recent terrorist attack at Pulwama which killed at least 40 police personnel and the never ending discussions about it have brought back memories of my Kashmir visit, of course not in a good way.

Ever since I can remember, I Kashmir has been referred to as the heaven on earth. Its visuals in numerous movies or any other television shows were enticing enough for me to visit it someday. The day finally arrived for me and my family at the end of November in 2017.

The beauty of the place marked its arrival well before we reached in the form of the breath-taking visuals from the plane from Delhi to Srinagar. Our first destination was Gulmarg. It was freezing at that time of the year. We were welcomed with snow-covered regions at the outskirts of Gulmarg. It was my first ever experience of snow.

Just hanging around the town was a therapy in itself (except when the monkeys decide to trouble you). The Gondola ride was like travelling to space; it just kept going higher and higher. The visuals at (what is called) Phase 1 looked more like the visuals of Switzerland in various Yash Chopra movies.

Similarly, our stay in the next destination, Srinagar was also pleasant, especially in the boathouse at Dal Lake. We had a short visit to Pahalgam as well, which was equally scenic.

But it was by the time we reached Pahalgam that I started having an unpleasant feeling over there. It was the day-to-day situation in Kashmir that I found inversely proportional to its natural beauty. The tension between the Indian Army-CRPF and the locals was evident.

Our driver-cum-guide provided us with plenty of information on the clashes between both sides, including the numerous stone-pelting incidents and its details. Along with soaking in the beauty of the place, this harsh reality also kept playing behind my mind.

The person sitting next to me in the plane while returning was a soldier. He narrated how they are on guard 24/7 throughout the year in extreme conditions. It showed that there are unhappy faces on both the sides.

My unpleasant feeling for the situation in Kashmir turned into shock during our last day in Pahalgam. After eating breakfast, I was taking a stroll on the streets of the town. I saw a group of small kids who must be around 7-8 years old. They were looking cute, so I decided to click their picture. They thought I am taking a video and excitedly started shouting, ‘Azaadi azaadi.’ I was speechless and somehow managed to click the picture after they were almost done.

I know there are separatists demanding an independent Kashmir and they have been teaching the same to the kids since their birth. But to see its result live in front of me was too much to bear.

Also read: The Kashmiri girl who waited for her father to return

The newspaper vendor at the corner of a quite road in a town in Kashmir was disappointed with not many customers turning up to buy the papers that November morning. He wasn’t surprised though. Who would pay to read the same set of news taking place in the valley?

Nazia was sitting by the window of their wooden house as dusk neared. The cute 7-year-old was anxiously waiting for her father to return home. At times she would venture out of the house and gaze at the long road ahead. His return would determine whether she would be able to go to school the next day. The principal had given a final warning to Nazia’s parents, who have been unable to pay her fees for that year.

The thought itself of not having the company of her friends next day onwards was too depressing for her. Her school was situated right in the middle of few picturesque hills. In fact, the entire town was an epitome of natural beauty. The greenery laden hills turned white during winter after snowfall. The flowerbeds, on the other side, provided perfect compliment.

Kashmir was nicknamed jannat (paradise) for a reason.

Bu the lives of the people from the lower strata of the society, like Nazia’s, didn’t resemble a paradise by any means. With most of the town folk struggling to make ends meet, their inner feeling was complete contrast to the beauty of the town. Just like Nazia’s father, who relied on odd jobs for his family’s survival.

It was a result of the tense political situation in the valley, which can be felt in the air. Clashes between extremists and army had become frequent. ‘Stone pelting’ had lately become the new keyword with regards to the valley.

What made life even tougher was that currently it was the ‘off season.’ November is the time when tourist footfalls decline by a great deal. As a large number of men worked as guides, the off season was no less than hell. So, when they would spot a group of tourists, they would literally hound them. But they can’t be blamed as they have stomachs to fill. 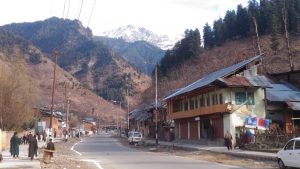 Nazia started getting worried as the sun was about to set. Sundown happens here sometimes even before 5 pm. As she was staring onto the mountain behind which the sun would set any moment, her father emerged in his usual slow walk.

He would always flaunt his red muffler around his neck. His body language and smile told Nazia that his father had managed to get the sum for her school fees. This was confirmed when he happily broke the news after entering the house.

The next day Nazia cheerfully walked to her school. She passed through the newspaper vendor who was disappointed with hardly any newspapers being sold that day. To kill his boredom, he picked up a paper and glanced just to pass his time.

The front page splashed the news of a stone pelting incident that happened in their town the previous day to oppose a political leader’s visit. The picture showed a group of people aggressively pelting stones at a government building. A man standing at the front had a red muffler around his neck. 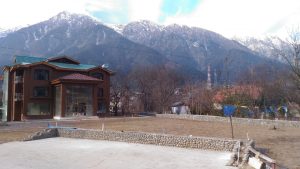