As soon as Demonetization was enforced on November 8, the first question that struck people was whether this move will help curb the menace of Black Money and corruption, as promised by Prime Minister, Narendra Modi. As I mentioned in my last post (HERE) on the issue, people like me, who have absolutely no knowledge in Economics or Finance, cannot answer this question.

However, you don’t need to be an expert in any subject to understand the extreme suffering experienced by a large number of people in the country. More than a month ago, the question was whether demonetization will succeed. Now, experts are trying to understand the extent at which demonetization will affect the country. In other words, it is a blunder.

Here are 6 reasons why defending demonetisation is like defending the indefensible:-

GPS joke: To support government’s move of introducing Rs 2000 note, news channels like Zee News and Aaj Tak ran programs explaining that the currency contains a chip that can be detected through satellite with the use of GPS technology. However, the news (?) not only turned out to be false but also a joke (watch VIDEO below). You can easily hoard black money in the Rs 2000 currency as well. If banning high value currency like Rs 500 and Rs 1000 can lessen the menace of black money, what exactly is the logic behind introducing Rs 2000 notes?

Instant backfiring: The above point was proven right even before 15 days of the decision. A number of members from the ruling Bharatiya Janata Party (BJP) have been caught with bundles of the new Rs 2000 notes. At the same time, banks are getting limited amounts of the new currency. So, how did your party men laid hands on the new notes in such large numbers? If this is not a scam, what is? (read news HERE and HERE) 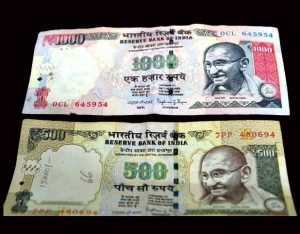 Punishing innocents: Instead of affecting black money hoarders, the move has made life hell for people from small towns, villages and those involved in small business that run entirely on cash. Wage workers have been temporarily out of job (read news HERE). You don’t need to be an expert to know that a large section of our population has no bank accounts and there are many villages either without any banks or having banks are faraway places (read news HERE). How can you expect them to leave their daily work and stand in queues for hours?

And sorry, the logic of going cashless doesn’t apply to poor people who live from hand to mouth. Even city dwellers like me have just installed PayTM and that too out of force. Plus even in 2016, there are villages with no access to electricity. So, how on earth do you expect them to buy smart phones and install PayTM? Don’t tell me you had no idea about this despite being the PM of a country.

Justifying death? This is the biggest reason why demonetization has failed. In fact, even if it would have yielded fruitful results (which appears like a dream), it would have still been a failure if more than 50 countrymen (might be more unofficially) got killed in it. Of course, Bhakts have been making inhuman arguments that a large number of people die every day. But these people died after standing in long queues for hours. They were standing in queues only and only because of the decision. They weren’t standing there out of their will or just for fun. There are incidents where people died after not receiving medical attention as the patients’ families didn’t have new currency. How will you justify these deaths even if demonetization turns successful?

Mocking the helpless: Like I said in my previous post on the issue, what has annoyed me the most about this whole episode is the mocking and casual attitude of the PM despite these many deaths. Last month in Japan, he mocked those who are facing problems due to demonetization (see video below). He repeated it later by stating that even beggars have started using PayTM. Seriously? The only justification for this can be that it was his lookalike who spoke these things.

Political parties can party: This is the second biggest fiasco after deaths. Political parties are the ones with most number of black money, which is spent the most during elections. Nobody knows who pays for those 24/7 in-your-face-and-TV advertisement played during elections. Now, these parties have been given further relief to not disclose their funding in old currency. A notification (out of the many) says that they are exempted from scrutiny (read the news HERE). So, if the biggest source of black money isn’t going to face any problem, what exactly is the point of the whole exercise of demonetization?