No, I am not giving an opinion on whether the Demonetization of Rs 500 and Rs 1000 notes and introduction of Rs 2000 notes is a good move. I have zero understanding of matters related to Money, Finance or Economics. After going through some expert opinions, I am assuming it’s a good move.

This write-up only looks at the situation from a logical and humanitarian point of view. The main aim or reason behind the demonetization exercise is to control the flow of Black Money in the country and to punish those who indulge in keeping undisclosed amount. Apart from this, it is also aimed at stopping the supply of counterfeit notes. 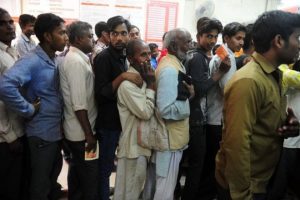 There is a saying, “It is fine if 100 criminals go unpunished, but it is not fine even if a single innocent gets punished.” The scenes taking place in the country since yesterday have made sure that this saying is continuously playing inside my head.

It is completely understandable that one has to face some inconvenience during such operations. I, along with many others, have no problems with it. There is dearth of Rs 100 notes while Rs 500 and Rs 1000 notes are finding no takers. It is okay for us because we have numerous options like online purchase, ATMs, net banking, etc.

However, we seem to have forgotten that a large chunk of Indian population doesn’t have bank accounts, leave alone net banking facility. How do you expect them to survive? As is seen from videos posted on the net, people have broken down as they have no cash for basic necessities. Just have a look at the insanely long queue outside a bank in Surat (below video). Have you ever seen such row of people ever? Are you assuming all of them are corrupt Black Money holders?

Such scenes clearly show that there was no planning whatsoever for an operation as massive as this one. But who is suffering the most due to their blunder? The Common Man, who pays his tax duly and has no black money like many of those millionaires. Know about the plight in detail by clicking HERE.

But I still wouldn’t have written this piece if I hadn’t seen Narendra Modi, the Prime Minister of India, joking and mocking about the scenario during his speech in Japan yesterday. It was a mixture of shock and disgust to see him poke fun at the situation by citing few examples of helpless people. If this isn’t sadistic, what is? (Watch the video below)

That too coming from the PM of a country and that too after knowing about few deaths that took place due to the chaotic process! I guess he realized his folly, so he came up with an emotional speech today. Well played!

If this wasn’t enough, people are comparing the plight of the Common Man with that of our soldiers on the border. These are the same people who are ready to label anyone ‘Anti-national’ at the drop of a hat. So, isn’t using the Indian Army to hide your blunder an anti-national act?

After making innocent taxpayers suffer to this extent (including death), they better make life hell for the corrupt Black Money holders soon. I am sure you know the names. Let’s see when they go to jail.

“It is fine if 100 criminals go unpunished, but it is not fine even if a single innocent gets punished.”