Superstar Rajinikanth announced his entry into politics on 31 December 2017 but has so far kept mum about which side he belongs to. There is no name for his party yet, so similarly there is no party flag or colour either. But through his latest release Kaala, he has made his dislike for Right Wing and Hindutva politics loud and clear, which proves that his party’s colour is surely not Saffron. So much so that it is not mere a subtext.

The Pa Ranjith directorial makes no qualms throughout the film about its severe dislike for the Saffron brigade and portraying them as villains. So, we have Nana Patekar as Hari Prasad who is the head honcho of a Saffron-clad party, thereby hinting towards the Bharatiya Janata Party (BJP). He wants to build towers in Dharavi and doesn’t care a damn about its residents.

He is so self-obsessed that he makes sure his face appears everywhere and anywhere in Mumbai. He keeps making references from epics like Ramayana. He promotes initiatives like ‘Pure Mumbai’ and ‘Digital Dharavi.’ Now, you don’t need to be even close to a political expert to know whom they are indicating at. 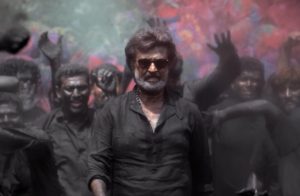 The builders who are hell bent in redeveloping Dharavi for their own good are called Manu Realty. Another clear criticism of the most hated ancient text, Manusmriti. A shop in Dharavi is seen selling beef, which is something the Right Wing considers blasphemous.

Kaala even goes to the extent of reversing the Ramayana, called the Hindu epic. Patekar is shown as Ram, who has nicknamed Rajinikanth as Raavan. Evil elements committing atrocities against the downtrodden is, over here, Ram teaching a lesson to Raavan. Rajini’s men coming up one after the other in a fight scene are described as different heads of Raavan. And, of course, Dharavi is a symbol for Lanka.

But that’s not all as far as Hindu Gods are concerned. The evil doer is called Hari and his subordinate Vishnu. Ideally, it should be the other way round since Krishna was Vishnu’s avatar. But Kaala is a reverse journey, so that’s purely intentional. It’s Kalyug, so the avatar is more powerful than the creator and Ram is not noble.

Rajini’s character is shown to be as a messiah of Dalits (I hate labeling anyone on the basis of their caste but it’s needed here for understanding). Gautam Buddha’s temple and Dr Babasaheb Ambedkar’s picture are shown around him quite a few times and his locality is called Bhim Nagar.

In fact, during a confrontational scene with Hari Prasad, Kaala declares, ‘I am ready to fight even ‘your’ God.’ This line subtly indicates the renouncement of Hinduism and embracing of Buddism by Dalits.

There is an article where Rajini’s die-hard fans are urging people to take Kaala as just another fictional film. But it surely won’t make any sense if Rajinikanth wholeheartedly bashes Saffron politics in a movie and supports the same in real life. As we all know, onscreen image of superstars is taken so seriously in India.

Maybe Kaala is more like a push for Rajini’s political career and his own way of revealing his political side.

P.S: Earlier in the year, Kamaal Hassan had said that it is unlikely that he would align with Rajinikanth if his political colour is Saffron. So are we in for something big?